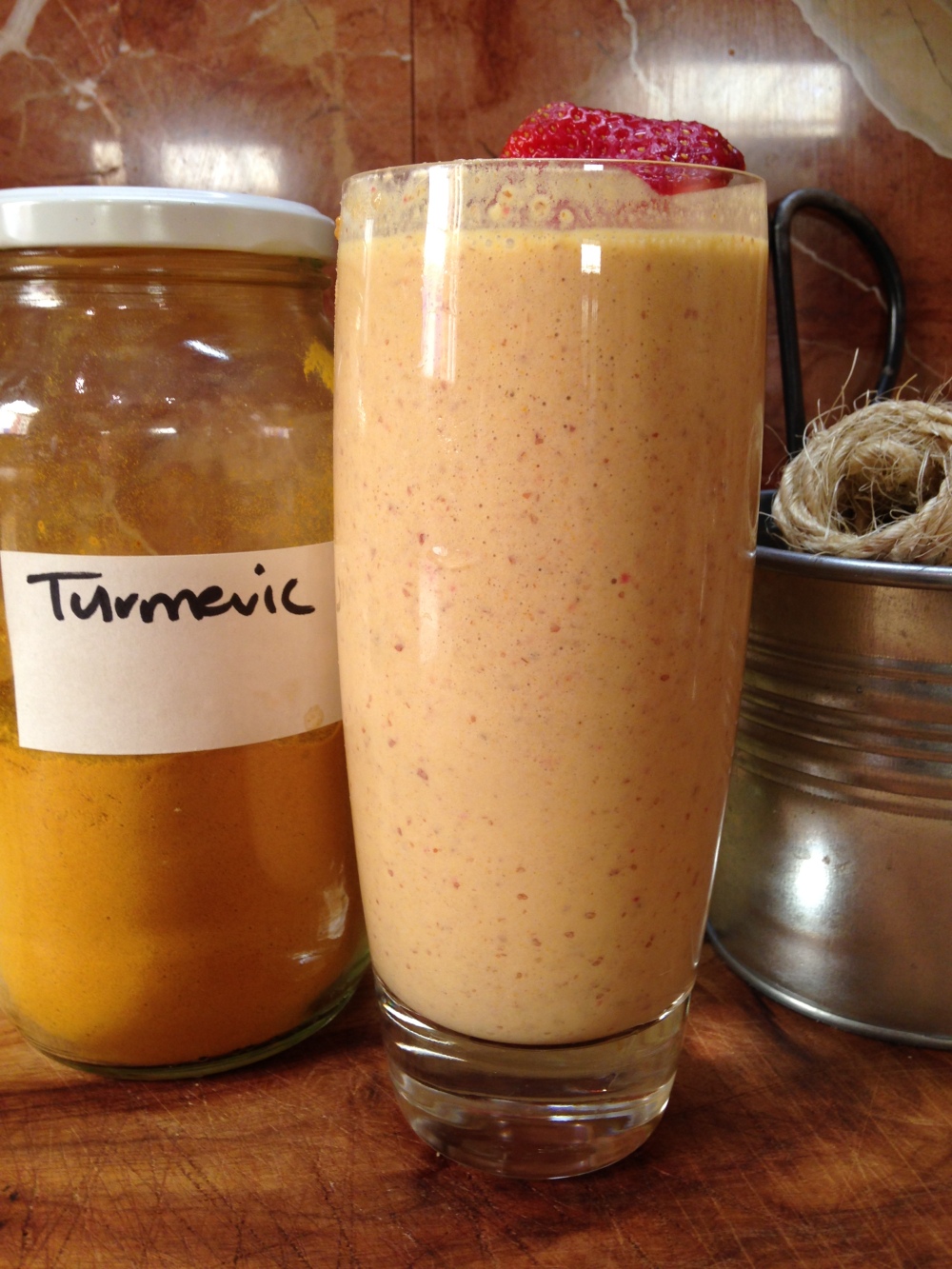 Anything 19seventiesgirl makes, left of centre in the kitchen, is given a sceptical raised eyebrow from Mr 70’s. When he drank, after some deliberation; the strawberry, turmeric smoothie I made him, I was indeed surprised.  Recently he has put the lycra on and taken up bike riding, to replace running, due to joint pain in his feet. Now, instead, he hobbles around in those clicky bike shoes and lycra stretched over his more than ample frame, while I consider natural alternatives to joint pain instead of the array of packaged products from pharmaceutical companies, whose side affects read like something out of the torture chambers from ancient history.

Turmeric is referred to as gold for its many health benefits, hence the term, golden mylk and it has been used since the dawn of time by various cultures. The Okinawans, renowned for their health and longevity as seen in the Blue Zone studies, drink turmeric tea regularly………..along with other amazing lifelong habits. I have suggested to Mr 70’s that we increase turmeric into our diets and told him about some coffee shops in new York and London that apparently serve more Golden Lattes than Coffee Lattes. This is hard to believe, I think I would be the last woman standing, or sitting as the case may be…..having my piccolo coffee in those venues!

No comment on golden lattes was forthcoming from Mr 70’s, so I took this as a green light to experiment beyond the use of turmeric into curries and the odd pilaf. Now, I know my piccolo’s from my lattes but coffee for Mr 70’s and me is sacrosanct and in the “no go” zone for change! So, my ideas to use turmeric therefore, floated to other options, such as soups, smoothies and desserts that semi mask its presence for now.

For all sceptics out there, give this smoothie a whirl, close your eyes and drink this delicious concoction and you too will be adding this wonderful plant to your diet.

Note: fresh turmeric is best for its health giving properties, just peel a piece, simmer in water for 10-15 minutes and squeeze the juice into your smoothie.

You need: per person

1 cup of strawberries washed and hulled

250ml mylk or milk of your choice, I used coconut

To make: Place all ingredients into blender and blend until smooth.